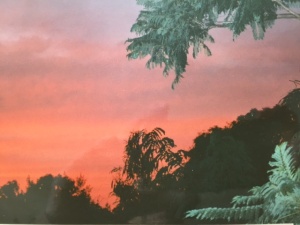 I’m still in the ‘research between drafts’ phase of writing, and over the last week I’ve been mainly reading, with a bit of watching! I’m reading Taken on Trust by Terry Waite, an articulate and in-depth account of his six years as a hostage. I have a list of other books about hostages, but this one seems to come up to the top of the pile every time. This account of almost three years as a hostage by Michael Scott Moore has also been useful, and probably closer to what I’m writing about than Waite’s experience, although perhaps the human psychology of captivity doesn’t vary with geography. I’d be interested to know if journalist Moore is writing a book of his own experiences.

I watched the film, Beasts of No Nation  based on the book by Uzodinma Iweala , the first Netflix original movie which was released in cinemas last Autumn. I’ve been reading about the film, getting mixed views on how well it covers the child soldier experience, but I watched it for information about the West African region. I think I may get the book to see how much more I can learn as so often much is lost when a book becomes a film. I’m interested in any other recommendations for books and films about West Africa, as it’s a while since I’ve been there … I did get out more photos (see above and left) to browse through, though, for more reminders and inspiration.

So, I’ve written a few hundred words of notes based on what I’ve watched and read, and I’ve listed some more of the scenes in the first draft, assessing them for whether they move the story on and how. I have a list of books about hostages which I’ll look for once I’m a bit further through Terry Waite. Work permitting, Thursday and Friday I’m mainly going to be reading! I’m making up for the lack of writing by writing blog posts  … last weekend I saw a great exhibition which I’ve reviewed. Still itching to start on the second draft, but I know I’m not there yet.

Reviews, Writing about the Visual

David Jones (1895-1974) is a modernist writer and artist. I first came across his somewhat impenetrable book, In Parenthesis when researching WW1 writing for my dissertation. In Parentheses, for all that some of it is difficult to read, does an amazing job of conveying written trauma, of addressing the impossibility of writing war experience in a linear and coherent way without diminishing the event. Jones has a breakdown after completing the work which was published in 1937.

Some of the exhibition focussed on Jones’ war art, but there was much else. In his early work, which was much more realistic, he depicted homes, people and animals. Some of his later works are fascinating word pictures, mixing Latin and Welsh, scratched crayon or chalk, and different fonts. This one, right, translates as ‘Truth is the best muse’.

Another expression of Jones’ later work is the much less realistic drawings he did. Many of these involve flowers and trees that seem to grow across the canvas, mixing pen, pencil and watercolour in a crazy compilation of images.

The exhibition took us from Jones’ very first drawings – an impressive lion, age seven, through to the end of his life. It was beautifully curated, and everything that I’d hoped for. Had that been all I’d seen I’d have been happy, but we noticed that there was a tour at two o’clock as well. We stayed at the gallery for lunch in the restaurant (£14.95 for two courses, excellent food, and there is also a café. Go there in warmer weather and there is lovely outdoor seating.)

The curator took us round some of the exhibits from Pallant House’s extensive collections, many of which have been donated to the organisation. The majority of works were by British artists from the last century, with some European work.

There was a gallery of portraits, including a self portrait of Lucien Freud, one of landscapes, and some of late twentieth century works. The person leading the talk knew plenty to keep us interested, and explained how Pallant House has been transformed from grand home to council offices to art gallery, and how in 2006 the large modern extension was built.

Alongside the works by well known and lesser known artists there were works from students and recent graduates from the art degree at Northbrook College. These works drew inspiration from the surroundings. I loved the ceramic hyacinths, placed alongside the hyacinths in the Lucien Freud portrait, and the fabric cushions and bird, inspired by the ostriches at the front of Pallant House.

If you do have a spare day at a weekend or over half term, do try and take the time to visit Pallant House. 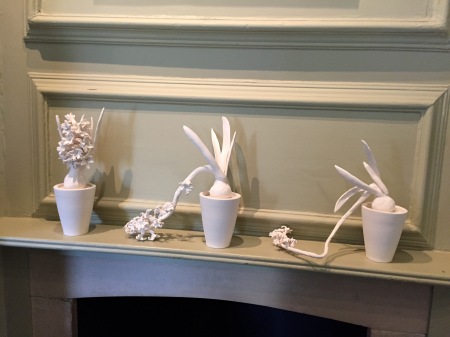 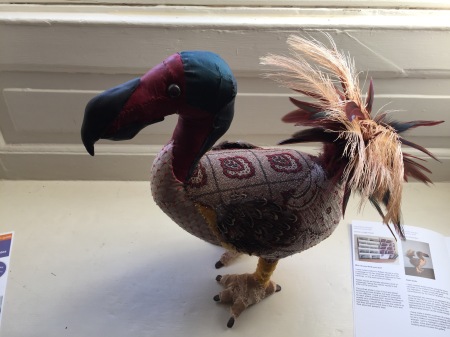 One of my favourite pieces, The South East Corner, Jerusalem, by David Bomberg