For a good read on a winter evening, I can recommend Miss Treadway & the Field of Stars, a mystery set in 1960s London. I picked this up because I’ve enjoyed William Shaw’s detective stories set in the same period. The period detail isn’t so intense at the start of the book, but it forms a background to a mystery that gently unravels:

Soho, 1965. In a tiny two-bed flat above a Turkish café on Neal Street lives Anna Treadway, a young dresser at the Galaxy Theatre. When the American actress Iolanthe Green disappears after an evening’s performance at the Galaxy, the newspapers are wild with speculation about her fate. But as the news grows old and the case grows colder, it seems Anna is the only person left determined to find out the truth. Her search for the missing actress will take her into an England she did not know existed: an England of jazz clubs and prison cells, backstreet doctors and seaside ghost towns, where her carefully calibrated existence will be upended by violence but also, perhaps, by love. For in order to uncover Iolanthe’s secrets, Anna is going to have to face up to a few of her own…

What I liked best about this book was how it looked at identity, in particular the identity of those who live in London but aren’t from England. The missing actress Iolanthe is American Irish, or is she? And who is Yolanda Green? We learn more about her identity as the story unfolds. The detective in charge of her case, Brennan hayes, who also goes by Barnaby, is of Irish origin but hides it in order to progress in the police force. The café owner, Ottmar is an exiled Turkish Cypriot, who left his dreams of being a poet behind when he fled. He wrangles with life in London and what it is doing to his family, in particularly his sixteen year old daughter Samira. Then there’s Aloysius, a young black accountant from Jamaica who aspires to be middle class and English.

“‘I have a dirty secret, Anna … I want a house, Anna Treadway. I want a garden. With rose bushes in it. I want two children in school uniform coming in at four o’clock to do a jigsaw on the living-room carpet. I want roast beef on Sundays, crumpets at the weekend. A ticket once a year to watch the Proms.'”

And Anna, quiet Anna who has no life outside her work as a theatre dresser, well, Anna’s identity gradually reveals itself as the book progresses.

Miranda Emmerson’s writing really comes into its own in paragraphs like this, where Ottmar describes his cafe:

“The Alabora, with its turquoise walls and sunset coloured chairs, its silver-framed mirrors and red and gold embroidered bunting was a vision from a dream he had; but it was a dream of his childhood. It was a dream of visiting his uncle in Istanbul and sitting in the coffee shops watching the men smoking and playing chess.”

She does a great job of conveying the wishes and dreams of the different characters, even those that they can’t say out loud. And, like with all good stories, in the end the characters find their own resolutions, if not in quite the way they might have thought. 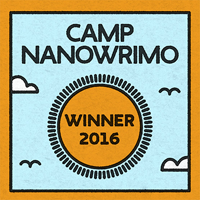